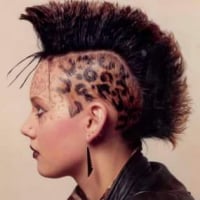 Way back at the end of 2003 I was fed up of credit cards and having a smallish debt around my neck. Didn't know where to start but then saw Alvin Hall on TV and got a second hand copy of his book and read it cover to cover, that was my first introduction to snowballing loans :T I knew it wasn't going to be easy to get rid of £12K debt and a £12K student loan with 2 kids on the go and an airhead bf that was in and out of work and spending money like it was going out of fashion :rolleyes:

Then in Feb 2004 I found this little site called MSE :rotfl::rotfl: Honestly, it really WAS small back then, but soooooooo informative, and that's when I started tapping in to Martin's hard work at researching better deals etc, and learning that companies aren't nice to you to help you, it's cos they want your money, I admit I was flattered when they kept giving tons of credit and big overdrafts

. But armed with MSE it meant we didn't have to miss out on some of the things that other families were doing and could yet still find the repayment money each month even when me and airhead split up and it was back to single mum again, which was also a lot easier to cope with now I had lots of new pals on MSE to moan to

So for the last 2 years I've been able to budget and put money aside for different things like car ins/tax/MOT, holidays, birthdays and christmas, and it makes it so much easier now instead of wacking out the CC and paying off the minimum each month

BUT I still can't go too mad and start blowing that £250 per month, cos my son's Dad has decided he doesn't want to pay maintenance anymore so I'll actually only be £50 richer, and that won't last long as we live in his house (although I pay the mortgage), and we might have to get out soon :rolleyes::rolleyes::rolleyes: Hey ho, I'll enjoy today :DNot that I think I'll ever be able to be frivolous, even if I won the Lottery! :rotfl:

So despite the sharks and incompetent bumbling idiots like NPower, HMRC, E7even, Eclipse, ScreenSelect, Capital One, Tesco and all the other money grabbing, customer ignoring prats that have tried to rip me off and undermine my goal (I'm not bitter eh?

But I'd like to personally and genuinely thank Alvin Hall, Martin, Godders, MSE and all it's members for all the hard work and research/reporting/support that they do here too, and everyone who's helped me so far.............THANKS VERY VERY MUCH :A :beer:

EDIT: oh god I forgot to mention the Snowball Calculator - was extremely invaluable to me all the way through!

PS to SS - I know I never posted my SOA here

I'm sorry, but seeing the amount of debt you and many others were in here, I just didn't feel I could whinge about my small debt, didn't seem right

[threadbanner]box[/threadbanner]
Honorary Northern Bird bestowed by Anselm
I'm a Board Guide and volunteer to help get your forum questions answered and keep the forum running smoothly on Special Occasions, Green/Ethical, Motoring/Overseas/UK Travel & Flood boards, it's not part of my role to deal with reportable posts. Report inappropriate or illegal posts to [email protected]. Views are MINE & not official MSE ones

Use our trick to extend them