Absolute ordeal with scam on Amex

KenRoberts
1 posts
Forumite MoneySaving Newbie
13 February at 2:20AM in Credit Cards
Hi all,
I'm looking for some reassurance about a dumb scam that I stupidly fell for.
Only last week I received a call on my landline from somoene who claimed to be from my credit card bank, American express. Everything seemed legitimate.. they already knew plenty of my details and just asked me to confirm some basic verification. He told me there's a suspicious pending purchase about to clear on my account for the large sum of about £2000. I confirmed that this absolutely wasn't me, so he said we'll need some more verification to get it cancelled. This verification process involved a bit more detail, but no actual log in info. I know that I got some texts with verification codes to my phone from actual Amex, which just reassured me that I was talking to the real deal. After this verification, he told me that this suspect payment had been cancelled there was nothing more to it.
He then pitches to me this new offer that's available for me involving them accepting apple gift cards for 110% of the purchase value. I think it's a good deal but I'm not motivated to get involved, but he sends me the email anyway (he knows my email address without me sharing it).
This is the email: 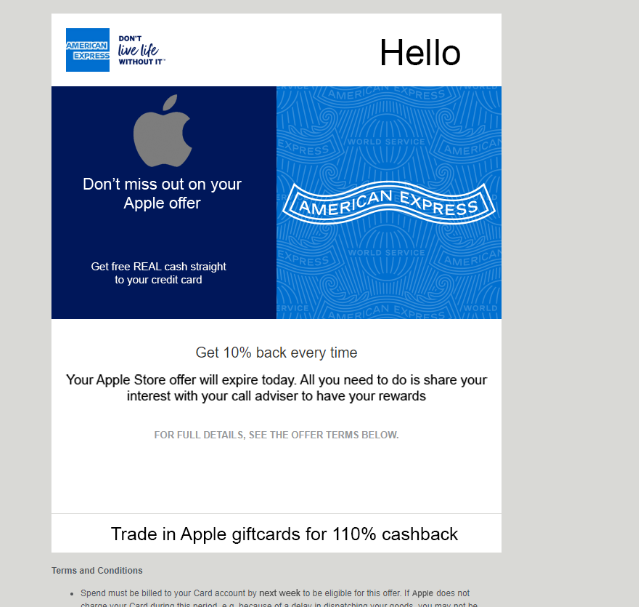 In case you don't know, email offers from Amex look exactly like this, the email address it came from is [email protected], which is not the usual Amex email address, but I didn't notice at the time.
So I agree to be opted into this offer as it's not even mandatory for me to actually take part in it. He tells me that as one of the first 1000 customers to agree to take part in the offer, I'm offered a complimentary £150 off my credit balance as a 'thankyou'. I accept that too obviously, free promotional money with no compulsory involvement, and I go about my evening.

A few hours later, very late at night, he calls me back sounding concerned, and says there was a banking error and my card was overpaid... instead of £150, I get paid £5000, my whole credit card paid off. I'm already panicking, feeling like a thief when I've not stolen anything. He tells me that I have a legal duty to pay back the overpaid money ASAP before a mark appears on my credit score, not letting anyone ever bank with me again. He works me up about police being involved and fraud investigations.. I plead that I have every intention to fix it fast, but I obviously don't have £5000 sitting in my current account, hence the credit card.
He tells me that I have no choice but to take advantage of the previously mentioned Apple exchange offer of 110% cashback, with the whole exchange going towards what I owe them. Buy apple cards on the paid off credit card, then give them the code, and have my debt to them lowered.
So I was completely panicking about this, I've got plenty of other things going on in my life at the moment including identity theft and people keep signing me up to loans or being a guarantor for a loan, so this whole thing is just another nightmare for me to deal with which is where I wasn't thinking logically in hindsight  when I went out to buy apple cards for the amount I owed and sending them the codes.
So a few days later the bank contact me wondering what the hells going on which is where I realised the whole thing was a scam. They said I'm the victim of a phishing scam and will be calling me back soon to hear the whole event.
My fear of getting myself in trouble with the bank, has got me in trouble with the bank. I'm wondering if the bank will hold me accountable for being a moron, or maybe go and try to retrieve the phone calls I received?
At the last second, the crooks also made an online purchase of their own on my credit card which makes things a bit easier for finding them I'd expect.
Thanks for reading this idiots submission, any reassurance or advice is greatful
1
«12»

Sainsbury's up to 50% off via Nectar
Any good?

South Western Railway announces extra compensation for strike disruption
'I got the council tax band for me and 29 of my neighbours lowered, saving us £10,000s'

Sky to hike broadband and TV prices for millions

Premium Bond prize rate to be cut to 1.3%

What's the best £1 you've ever spent? From a corner sofa on eBay to a box of fish fingers that won a wedding dress, I asked what MoneySavers did with a quid