Forumite
4 August at 7:28PM edited 4 August at 7:31PM in Green & ethical MoneySaving
I think this fits within the green and ethical section of MSE.

This is an ongoing project to replace my gas combi boiler with water tanks heated by immersion. (Hopefully finished In next couple of weeks)

A common question would be why not use a heat pump, and there are two reasons for this.
1. It would have to run all day, and I plan to use only cheap rate electric of 3-4 hours of octopus go/faster.
2. Wife says NO, heat pumps are ugly, and thats that.

I had looked a while at sunamp, tepeo and warmstone instead of storage of water, as all seemed to have in impressive lack of heat loss, but 1 by 1 they were crossed off for various reasons from conversion losses, lack of ability to take heat in a short time, and amount of space (and weight(and wait)) required.

I had 1meter of headroom under the house, so I could only have horizontal tanks and these are much less common.

I eventually decided on telford tempest cylinders, and found they had a bespoke service which i used to spec a tank with twin coils, 1 for hot water and 1 for central heating.
After a bit of back and back and forward I agreed on this design. 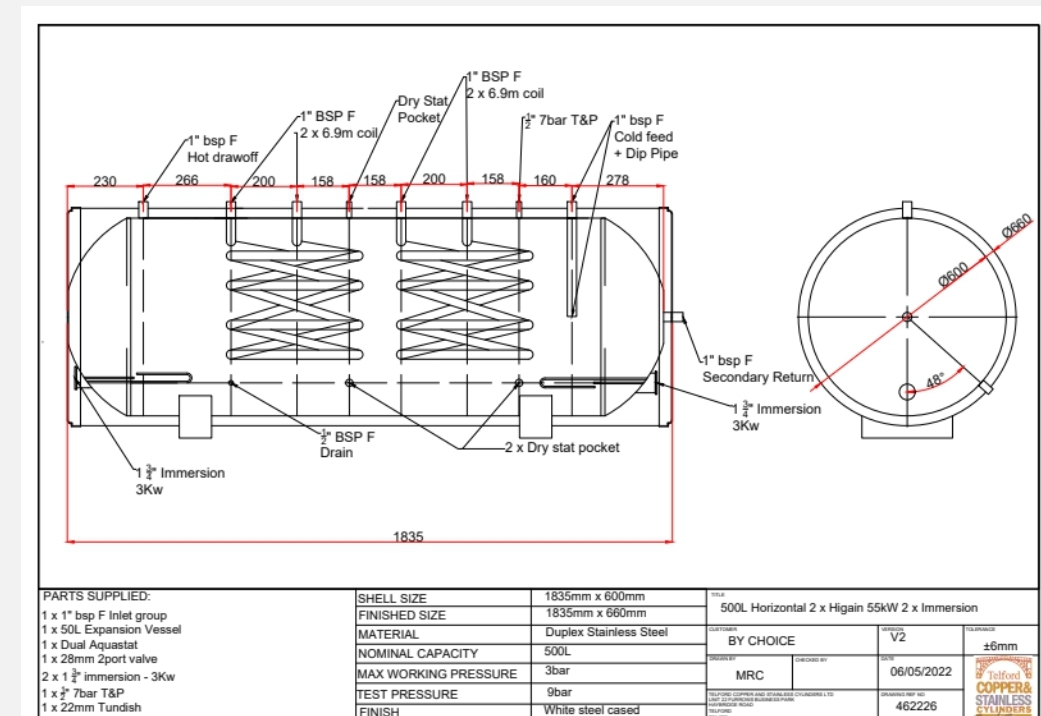 A fairly standard water tank, with heat coils for solar and a combi to be used to heat the tank.
The coils give 25kw of heat transfer each, so not too dissimilar to the 28kw combi boiler they are replacing.

I was initially going to buy two identical 500L tanks, however they were coming in at over £3200 due to them being custom made.
So instead I opted for 1 custom tank and one off the shelf 300L tank which happened to have a small "solar" coil in it. The two combined came to around £2600.
This reduced my total literage to 800, from the 1000L I wanted, but I'm hoping this will be enough.

My 15 year old combi was in its death throes which was a good nudge to get me to move on this, and it was the right time of year, May/June meant plenty of excess solar to heat the tanks at no cost and a few months of messing about to get it optimised, so that when winter comes around I know it will work.