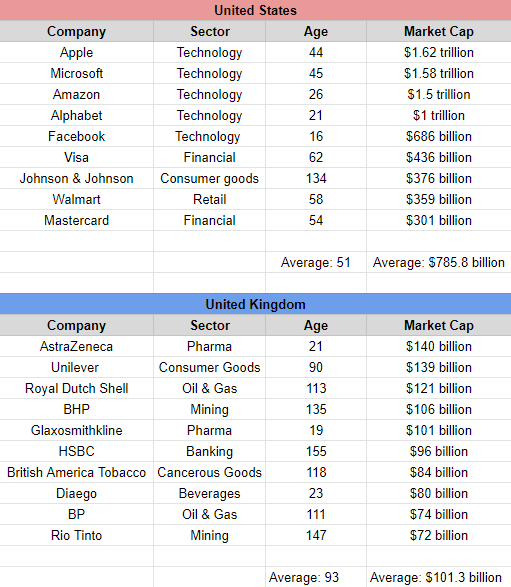 Where did we go wrong? Oh I know, we sat on the sidelines through the biggest revolution since the industrial revolution and ignored technology.
Our top 10 companies are nearly twice as old and worth 1/7th as much. Last week Apple's market cap gained $135billion, nearly the entire market cap of our richest company... in 1 week!

It's hard to pin point why the UK failed to get in on the tech boom but one things absolutely certain, the UK cannot rely on dinosaur industries to prop up our economy anymore.  There has to come a time when we realise this and start pushing out technology of our own? Boris wants to "build build build" infrastructure, well maybe he should do something to incentivise people to create technology companies? Maybe reduce the cost of computer science degrees by 50%. Maybe give tech startups (subject to approval of course) a 0% interest loan which is forgivable if the company goes bankrupt. Maybe slash the corporate tax rate for existing and new tech companies from 18% to 5% to encourage more people to create tech companies.

I dunno I'm just spit balling but the world is becoming more and more digital, more and more tech orientated and if we don't get in on it soon we're going to be royally f'ed. There are 4 new industries on the horizon and those are AI, bio-engineering, space mining and alternative energies, all require a solid tech foundation which we don't have.  You know the saying about companies that fail to evolve end up failing to exist? Well that can happen to countries too you know, not cease to exist in the literal sense, but cease to exist on the world stage.

MSE Autoswitch launches
Let us do it all for you

NS&amp;I slashes savings
What to do?

TSB Classic Plus interest rate to fall to 0%