Is overload a common smart fault ?

Its the Secure Liberty smart meter, EON supplied. I don't recall the specific type, its probably the 100 series. Usual one anyway.

Anyway on occasion if you press say 1 or 3 to view the daily/monthly costs it does its usual thing, for example:

OVERLOAD (if it does it!) if it does not then its the usual rest of the sequence:

PAYG
Balance: £xx.xx
Days left: xx
If its in F-Credit time or E-Cred then it will say so, otherwise that's it the display is complete.


If you do nothing after about 5-10 seconds or so it jumps back to either the start of the sequence (rare) or more commonly to the 'PAYG' part of it.

The slightly interesting thing here are:

1. I don't actually own enough electrical appliances (I think) even if I plugged them all in including one 1Kw (yes just one kilowatt fan heater and I have stovetop kettle not electric)

All I'm saying here is even if I managed to plug in everything and switch it all on, I do not think I could actually get it near the overloading limit! Possibly near the ring-main circuit limit or above but nowhere near the 80-100 limit of the meter. :rotfl:


2. Although I can't be sure on this as it was a while ago I'm about 75% certain with the isolator off (the usual DPST switch between meter and consumer unit) it can still do it, as in with no power out.


I did wonder if it might decide one day its had enough and thinks its a real overload and shuts down, which would be quite unfortunate.


The reason I've not rang up about this is it happens completely at random and the chances of it doing it when the engineer appeared are probably not likely, unless its logged somehow which is "technically" possible if nothing else, its certainly got the capabilities at least to monitor loads in general. The other reason is due to the fact that last time it took three visits/attempts to get one that worked properly, no one's fault as such just bad luck but I 'd rather not go through that all again.

Interestingly (or not) a cursory Google in general only tends to show this error for gas meters, not electric ones.

EDIT... I managed to get a pic of it, its very poor quality though sorry however you can just make it out. I did try to brighten the pic a bit but its the best I can do at the moment: 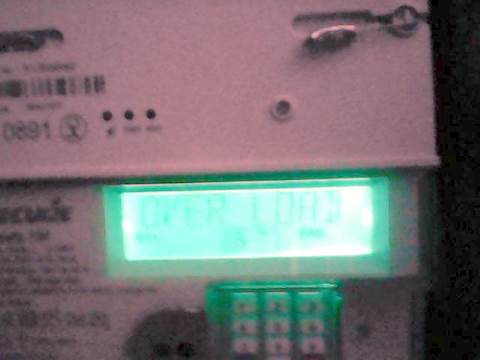 Its not done it again

Chances of it happening when someone visits are rare.
0
«12»