How to not "Look after my bills"

MoneySaving Newbie
25 February at 9:22AM in Energy
I signed up to Look after my bills to try and save some money on my electricity and gas but also to save the need for me to have to do it each year and keep things easy.
However, easy it has not been!  I filled in all the usual details, including the estimated usage in kWH for both gas and electricity.  Previously I was paying about £90 a month and was just coming to the end of a 1-year fixed rate good contract so seemed like a good time to change.
They sent me an email which, at the top said: 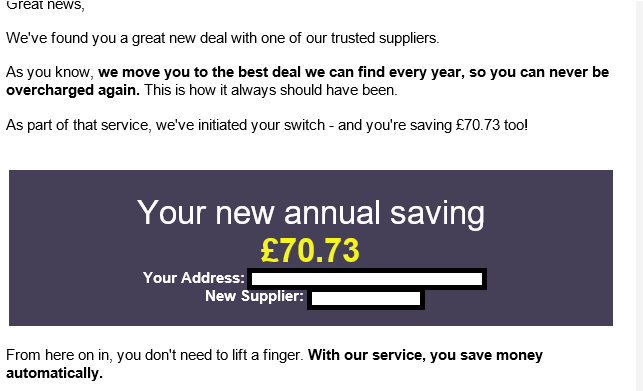 Great news I thought, money saved, leave it to them.
However when I looked at the direct debit information that came a few days later, it stated that the monthly payments were to be £124 a month.
This seemed somewhat baffling given I was promised an annual saving of £70.73.  When I queired this I did struggle to get a response, just the 'stock' answer of proces going up this year etc but nothing about how the £70 was supposed to materialise.  Only when I pushed this to a formal complaint did they explain the calculation.
The saving is calculated based on the difference between the rate that they have chosen and the rate if I stayed with my previous supplier.  Had I stayed with my previous supplier, obviously I would have been transferred to the horrific standard variable rate.  So the 'saving' was based on the difference between the new contract and the standard variable rate of the old supplier.
This makes sense but I think their practices are misleading.  The big headling in the email they send about the switch was all about the annual saving.  Buried at the bottom was the details of the direct debit (which I should have read earlier I admit) and buried in their website is how they calculate this.
My monthly repayments are up by £35 a month (39% increase!!!) but apparently there is a £70 saving.
I understand their calculations now but believe the emails they send are misleading for those who just want it done and perhaps dont look at the details of the calculations on their website.  The whole reason to go with them is to get them to do the detailed work!
Yes there will be a better saving for those moving from a standard variable rate but this misleading practice is not right for those who want to 'look after their bills'!
Would be interested in any comments on their methods of emailing 'savings'!
0
«12»

What it means for your gas & electrity

What really makes a difference?

Free £6 Amazon credit for some

When you add £50 to gift card balance